“It fits the scale of existing fiber technology and could be applied to increase the bandwidth or potentially the processing speed of that fiber by over 100 times within the next couple of years,” RMIT Prof. Min Gu said. “This easy scalability and the massive impact it will have on telecommunications is what’s so exciting.” Fiber isn’t going anywhere. Even if wireless becomes more important, such as in 5G networks, fiber is still needed for backhaul. The school doesn’t say what speed it has gotten or will obtain other than using the 100x figure. But, in part, it’s a new miniaturization of the equipment that’s the big deal. Previous experiments by various academic teams dating back to at least 2013 have involved larger equipment for transmission and decoding. RITT says the former gear would not have been practical for current telco environments. RITT, however, says the newly shrunken spiraling, speed-inducing equipment is nanoscale.

Hunton says the OPC has clarified that statement in its final guidance. "In general, when an organization (the 'principal') provides personal information to a third-party processor (the 'processor'), the principal may reasonably be found to be in control of the personal information it has transferred to the processor, triggering the reporting and record-keeping obligations of a breach that occurs with the processor," the law firm notes. "On the other hand, if the processor uses or discloses the same personal information for other purposes, it is no longer simply processing the personal information on behalf of the principal; it is instead acting as an organization 'in control' of the information, and would thereby have the obligation to notify, report, and record." Takeaway: Organizations must assess all breaches on a case-by-case basis, as well as ensure they have the right contractual obligations in place to ensure that any third parties that handle its data take appropriate steps to secure it, Hunton says.

The demand from the Google Brain team that leads research on AI is for "gigantic machines" said Young. For example, neural networks are sometimes measured by the number of "weights" they employ, variables that are applied to the neural network to shape its manipulation of data. Whereas conventional neural nets may have hundreds of thousand of such weights that must be computed, or even millions, Google's scientists are saying "please give us a tera-weight machine," computers capable of computing a trillion weights. That's because "each time you double the size of the [neural] network, we get an improvement in accuracy." Bigger and bigger is the rule in AI. To respond, of course, Google has been developing its own line of machine learning chips, the "Tensor Processing Unit." The TPU, and parts like it, are needed because traditional CPUs and graphics chips (GPUs) can't keep up. "For a very long time, we held back and said Intel and Nvidia are really great at building high-performance systems," said Young. "We crossed that threshold five years ago."

A time-saving typing tool that works anywhere in Chrome

The tool is called Text Blaze, and while it's technically still in beta, it's been working incredibly well for me both on Chrome OS and within Chrome on Windows. It's super-easy to set up, too: Once you've installed the extension and connected it to your Google account (which is what allows your snippets to sync automatically and always be available on any device where you're signed in), you just open your dashboard — by clicking the Text Blaze icon in your browser's address bar or by visiting this link — and there, you can create and manage all of your text replacement snippets. Creating a new snippet is as simple as clicking the blue "+" button in the upper-left corner of the screen. You can also edit any existing snippet (including a series of sample snippets provided when you first install the program) by clicking its title in the "My Snippets" column on the screen's left side.

How 5G aims to end network delays that slow everything down

There's evidence 5G is getting the promised low latency links. "We are between 1 to 2 milliseconds," Rygaard said of Nokia's tests of latency between phones and cell towers. A millisecond is a thousandth of a second, about the time a baseball is in contact with a bat that's hitting it. There will be other delays in the system, such as software actually doing something with the data that's traversing the network, but the 5G fundamentals appear to be in place. "We're seeing the very low single digit milliseconds," Fuetsch said. That's more than the 1-millisecond latency goal 5G proponents have sought for years, but it also includes communications deeper into the network, not just between a phone and cell tower. And it's a big improvement over today's 4G networks with latencies more than 10 times slower, according to real-world measurements from mobile analytics company OpenSignal. On top of that, future versions of 5G will be able to guarantee that latency.

Thousands Of Swedes Are Inserting Microchips Under Their Skin 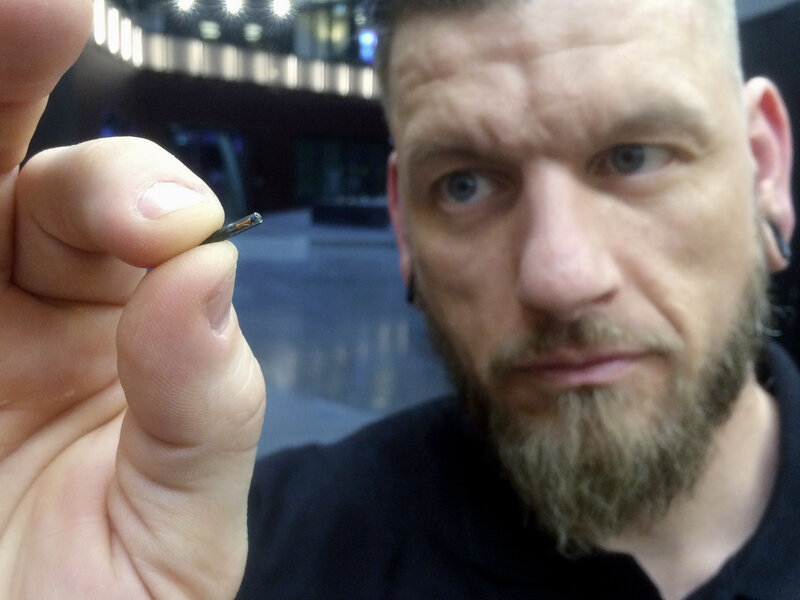 So many Swedes are lining up to get the microchips that the country's main chipping company says it can't keep up with the number of requests. More than 4,000 Swedes have adopted the technology, with one company, Biohax International, dominating the market. The chipping firm was started five years ago by Jowan Osterlund, a former professional body piercer. After spending the past two years working full time on the project, he is currently developing training materials so he can hire Swedish doctors and nurses to help take on some of his heavy workload. "Having different cards and tokens verifying your identity to a bunch of different systems just doesn't make sense," he says. "Using a chip means that the hyper-connected surroundings that you live in every day can be streamlined." ... "I see no problem for [it] becoming mainstream. I think it's something that can seriously make people's lives better," Varszegi says.

What is WPA3? And some gotchas to watch out for in this Wi-Fi security upgrade

WPA3 provides improvements to the general Wi-Fi encryption, thanks to Simultaneous Authentication of Equals (SAE) replacing the Pre-Shared Key (PSK) authentication method used in prior WPA versions. This allows for better functionality so WPA3-Personal networks with simple passphrases aren’t so simple for hackers to crack using off-site, brute-force, dictionary-based cracking attempts like it was with WPA/WPA2. Of course, it will still be just as easy for someone to guess a very simple password when they’re attempting to directly connect to the Wi-Fi with a device, but that’s a less practical cracking method. The encryption with WPA3-Personal is more individualized. Users on a WPA3-Personal network can’t ever snoop on another’s WPA3-Personal traffic, even when the user has the Wi-Fi password and is successfully connected. Furthermore, if an outsider determines the password, it is not possible to passively observe an exchange and determine the session keys, providing forward secrecy of network traffic.

H-ISAC President Denise Anderson tells ISMG her organization will continue to closely collaborate with HHS on information sharing. "The H-ISAC has been actively engaged with the HCCIC and now the HC3," she says. "We will continue to work with HHS as well as our other strategic partners in government and industry to support the sector with situational awareness, threat mitigation and incident response." The ability of HHS to respond to cyber incidents is critically important, and in the past year has been limited, says Jim Routh, chief security officer at health insurer Aetna and an H-ISAC board member. "Coordination across the sector in collaboration with DHS is essential and represents an opportunity for continuous improvement. This [HHS] announcement represents a step forward, but the healthcare sector needs more maturity in capability. The H-ISAC has always and will always support the HHS commitment toward cyber incident response." HITRUST, best known for its Common Security Framework, also has been working for several years with the federal government

5 Concepts That Will Help Your Team Be More Data-Driven

The first is learning to think like a data scientist. We don’t speak about this often enough, but it is really hard to acquire good data, analyze it properly, follow the clues those analyses offer, explore the implications, and present results in a fair, compelling way. This is the essence of data science. You can’t read about this in a book — you simply have to experience the work to appreciate it. To give your team some hands-on practice, charge them with selecting a topic of their own interest (such as “whether meetings start on time”) and then have them complete the exercise described in this article. The first step will lead to a picture similar to the one below, and the rest of the exercise involves exploring the implications of that picture. ... The third skill is conducting a root cause analysis (RCA) and its pre-requisite, understanding the distinction between correlation and causation. Studying the numbers can point to where most errors occur or demonstrate that two (or more) variables go up and down in tandem, but it cannot fully describe why this is.

How to set yourself apart in the future of work

There’s no way we can think as quickly, or efficiently, as a computer if the primal part of our brain–the amygdala–directs us toward protectionism. Fear has been shown to impair function in the hippocampus, a vital part of the brain that helps regulate mood and memory. It is also key to creative function. Any negative impact on this part of the brain is bad news for your career and can cause you to limit the very qualities that will be key to career resilience in the future. The experience of using voice recognition software can feel more sci-fi than AI, but it’s helpful to remember that AI is still pretty narrow. A robot that can perform surgery can’t make you a coffee. Even the most sophisticated AI cannot answer the question “is this a cat?” whereas a human toddler would know in an instant. If you’re still feeling skeptical, google the dog versus muffin test. You’d have no problem spotting the difference.

"If you think you're leading and no one is following you, then you're only taking a walk." -- Afghan Proverb

Posted by Kannan Subbiah at 5:53 PM