The future of the fintech will require security, not just innovation

But this innovation must not come at the expense of security. The evolving technology and regulatory landscape have meant that cloud technologies must have security baked at its core. Financial services must also not overlook the security risk associated with the creation of banking apps in the open banking environment – in particular, API security. As developers within banks and fintech companies use APIs to connect technologies (most commonly apps, but also platforms and systems), they create new digital banking innovations and remove barriers to allow more efficient, simpler ways to kickstart innovative programs. But while the value of inter-connected applications is undeniable, there are also significant risks. APIs provide open connections between platforms, a failure to protect these connections will provide hackers with the opportunity to attack API services with both stolen or invalid credentials. It is essential that developers and security teams within these organisations pay close attention to securing APIs. To illustrate this, if you visualise opening a door, you want to make sure only the right people (or in this case, apps) have the correct keys.

Whether you’re team Lyft or prefer to hop in an Uber, both services, much like Google Maps, power decisions with AI. Driver assignments, driver ETA, and your ETA at your final destination – are all calculated by algorithms that are constantly tested and refined in real time, using machine learning and the massive quantities of data from drivers and customers. One important thing for many; rideshare companies are using machine learning to help beat the dreaded ‘surge price’. Surge pricing, or time-limited price hikes, currently compensates for times when there are not enough cars on the road to supply all the passengers who want rides. Ideally, machine learning could anticipate times of high demand (say, commute times in April on the East Coast when it frequently rains) and incent cars to be on the road, in advance. ... Simple rules-based filters are used for the spam filter. Think of the words and phrases “pharmacy”, “you’ve won the lottery” or “Nigerian prince”. While you may very well be friends with a Nigerian prince, if the message seems suspicious, and is coming from an unknown sender, then it will probably get flagged and kicked to spam.

“We need to move away from ‘digitised’ to ‘digital’ because a lot of companies have been focused on digitising their processes instead of making them truly digital,” she said. “In an attempt to create a digital channel, they are doing things like putting forms online, instead of thinking about tokenising identity, access, authentication and authorisation, as well as about how to remove friction and improve compliance.” As a result, there are some new roles that are emerging in the ecosystem, said Dow. “There is more and more need for a relying party to feel that they can trust where the data is coming from, trust its provenance, and trust who is supplying it and who is vouching for it.” With the explosion of internet-connected devices making up the internet of things, Dow said there are now many more things to trust, authenticate and authorise. “We need to get the utility layer right around consent, otherwise it becomes just another bad cookie policy,” she said. “In addition, we desperately need better governance and transparency around how data is collected and protected.”

It is far easier (and less risky) if a bank or credit union wants to use data insights for internal purposes. Analyzing customer acquisition, attrition, product utilization and cross-selling for department managers has less risk than using this same analysis to communicate with the customer. During this learn and optimize stage, Rogati states, “We need to have a (however primitive) A/B testing or experimentation framework in place, so we can deploy incrementally to avoid disasters and get a rough estimate of the effects of the changes before they affect everybody.” Rogati also stresses the need for establishing a baseline to measure results against. Simple machine learning algorithms like logistic regression are also recommended at this stage to ensure all needed insights are included in the dataset. Again, time spent on this stage will reduce challenges and improve results down the road. There is no guarantee that machine learning and AI will improve your results. Similar to a turbocharged car with bad wheel alignment or bad breaks, the most advanced data analytics tools may simply get you to the wrong outcome faster.

Disruption coming to our cities, roads and skies

Connected vehicles with advanced driver-assistance systems are already entering our roadways. Built with equipment such as top view camera systems that provide a 360-degree bird’s eye view – plus sensors that detect airbag deployment, windshield wiper operation, engagement of brakes, etc. – these vehicles can transmit data about their status to other connected vehicles on the roadways and emerging intelligent roadway infrastructure. Technology decision makers in Connected World industries (automotive, aviation, government transportation agencies) expect connected vehicles to deliver a whole host of important benefits: fewer collisions, reduced congestion, less pollution, and more connected and informed driving (and riding) experiences. Autonomous vehicle technology builds on this connected vehicle foundation. Many tech decision makers in our Connected World industries think riding in an autonomous vehicle will be exciting, while a few admit it might terrify them.

Survey Reveals That Enterprises Are Entering the Third Era of IT

“The ability to support greater scale is being invested in and developed in three key areas: volume, scope and agility. All aim at encouraging consumers to interact with the organization,” Mr. Rowsell-Jones explained. “For example, increasing the scope means providing a variety of digital services and actions to the consumer. In general, the greater the variety of interactions that are available via digital channels, the more engaged a consumer becomes and the lower the costs to serve them are.” The transformation toward digital business is supported by steady IT budget growth. Globally, CIOs expect their IT budgets to grow by 2.9 percent in 2019. This is only slightly less than the 2018 average growth rate of 3 percent. A look at the regional differences shows that the regions are moving closer together: The leader in budget growth is once again Asia/Pacific with an expected growth of 3.5 percent. However, this is a significant cut from the 5.1 percent projected budget increase in 2018.

What Is A Data Lake? A Super-Simple Explanation For Anyone 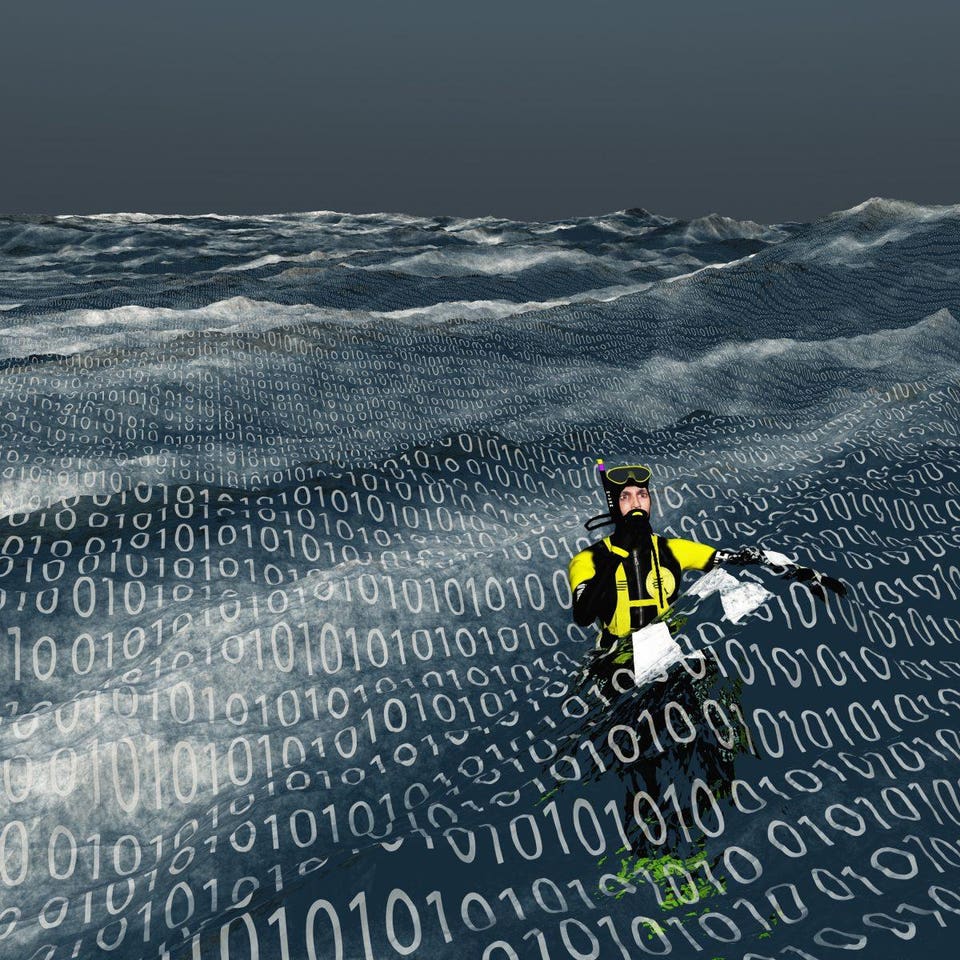 Some mistakenly believe that a data lake is just the 2.0 version of a data warehouse. While they are similar, they are different tools that should be used for different purposes. James Dixon, the CTO of Pentaho is credited with naming the concept of a data lake. He uses the following analogy:“If you think of a datamart as a store of bottled water – cleansed and packaged and structured for easy consumption – the data lake is a large body of water in a more natural state. The contents of the data lake stream in from a source to fill the lake, and various users of the lake can come to examine, dive in, or take samples.” A data lake holds data in an unstructured way and there is no hierarchy or organization among the individual pieces of data. It holds data in its rawest form—it’s not processed or analyzed. Additionally, a data lakes accepts and retains all data from all data sources, supports all data types and schemas (the way the data is stored in a database) are applied only when the data is ready to be used. ... A data warehouse stores data in an organized manner with everything archived and ordered in a defined way.

Spray-on antennas will revolutionize the Internet of Things

The way the concept works is that titanium carbide compounds are dissolved in water to make the paint. The compound derives from a type of materials-science product called MXene (invented at Drexel in 2011 and pronounced "maksens"), which is basically an inorganic, super-thin material only a few atoms thick that combines conductive metal with water-dissolving characteristics. The material in the lab tests is then actually sprayed onto the object using a craft-style airbrush. When the water evaporates, the antenna remains. “The exceptional conductivity of the material enables it to transmit and direct radio waves, even when it’s applied in a very thin coating.” It’s extremely conductive, the researchers say. Slimming, such as the tens-of-nanometers to microns thick that the group have obtained with the transparent antennas, would provide IoT weight reduction, too. That’s crucial for some tracking sensors, such as those used in shipping. The lightness could also have a knock-on effect in reducing sensor power consumption — the lighter a drone is

Pushing the Boundaries of Computer Vision

Although augmented reality has occasionally been described as a bridge to true virtual reality, AR is actually more difficult to implement in some ways. Nevertheless, the technology has evolved rapidly in recent years, thanks in part to computer vision advances. At the core of AR is a challenge relevant to other fields of computer vision: Object recognition. Small variations in objects can prove challenging for imagine recognition software, and even a change in lighting can cause mismatches. Experts at Facebook and other companies have made tremendous progress through deep learning and other artificial intelligence fields, and these advances have the potential to make AR and other vision fields dependent on object recognition more powerful in the coming years. Another transformative use-case is predicted to be agriculture. Agricultural science is charged with feeding the world, and computers have been making major strides in the field in recent years.

In the new wave of AI, opportunities and challenges exist at the same time. On the positive side, AI could increase automation, support intelligent analysis and decision-making, and create new business models and industries. But AI also carries a series of risks. In the financial industry, potential risks include micro-financial risk and macro-financial risk. The former could influence the stability of markets, causing turmoil. The latter could trigger risk around market concentration, market loopholes, connection and technology. Language and vision have been the two major breakthroughs in AI so far, according to research from the BCG Henderson Institute. Machine vision and speech recognition give machines cognitive skills, allowing AI to be applied in real-world contexts, which will change all aspects of society in the future. The research also reveals that industry users understand AI from three dimensions: data, processes and actions. AI improves workflows by processing structured data as well as unstructured language and image information to deliver new products and services, and provide data or physical feedback.

"A single question can be more influential than a thousand statements." -- Bo Bennett