Disrupting And Elevating The Relationship Between Brand And Consumer

In the industry of digital brand building, our success as an agency can be measured by the longevity of a business -- and user experience strategies have proven to be the key element in ensuring this relevancy. All of our clients experience their own evolution based on their specific customer needs and patterns, but in our experience, brands who continually refine their approach to meet and exceed user expectations are those that have the best chance at long-term growth and a considerable tip of the scales in their favor for market share. There’s little argument that e-commerce is a thriving market. The beneﬁts are far-reaching -- value, speed and availability, to name just a few. Consider this: Nearly 49% of consumers shop online for consumer packaged goods, and it's estimated that in five to seven years, 70% of consumers in the U.S. will do so regularly. When you take into consideration the traditional pattern of in-store grocery shopping, it's mind-boggling that a relatively recent innovation has changed the face of the way we accomplish this daily task.

“Every publisher I talk to has to be talked down off the ledge because what they are looking at is the numbers. I believe there is positive news in this,” says Sreenivasan. “The glimmer of hope that I see in this is that yes, they are deemphasizing brands, and emphasizing people, and therefore your traffic will drop. But in the emphasizing of people, your path to salvation lies there. Because if your content is readable, shareable, embeddable, joyful, or useful, people will share it. And if they want to share it, they will. That’s where we have to think about our content: How do we make it so good that people want to share it?” Beyond Facebook of course are other influential platforms, including one that Sreenivasan has a particular eye on. “One platform that is vastly underused is LinkedIn,” he says. “LinkedIn has so many opportunities because it is aimed at people at work and I’ve now made it a resolution that I am going to do more on LinkedIn because I see the pick-up it gets when you post an article. And so what is your LinkedIn strategy?”

Decoding the evolution of Blockchain 3.0

The blockchain technology that powered bitcoin is a relatively bare-bones system that requires layers of protocols to be built on top of it to make it a usable platform for utilities like smart contracts. Ethereum, on the other hand, was launched with its own scripting language baked in, making it possible to build complex smart contracts, decentralized autonomous organizations, DApps and even other cryptocurrencies with relative ease. Bitcoin’s rise to popularity resulted in its supporting blockchain technology, being categorized as Blockchain 1.0. Ethereum’s broad adoption as a decentralized platform for applications to run exactly as programmed enabled it to be categorized as Blockchain 2.0. Currently, we are witnessing a new set of blockchain platforms and networks based on DAG technology. There exist a number of DAG-based blockchains such as Hashgraph, IOTA, Stellar, NEO, RaiBlocks, etc., which have been developed for specific real-world problems. These platforms belong to the third generation, or what we call Blockchain 3.0 group, and are developed to overcome the key issues of the original blockchain (Blockchain 1.0) and Ethereum (Blockchain 2.0), and are designed on the FFM concept.

How babies learn – and why robots can’t compete 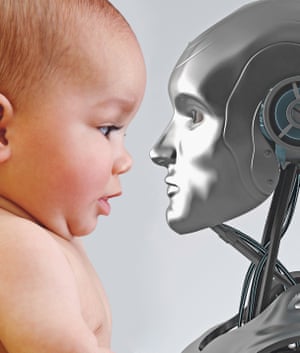 If all of us are to achieve our potential as learners, the question we have to answer is how we ought to shape this environment. Human brains have specially adapted to learn. Our long period of immaturity is a risky evolutionary strategy, making us vulnerable early on to predators or sickness, and delaying for many years our capacity to reproduce, but the payoff is immense. We can actively incorporate enormous amounts of the latest information from our environment and social group into our cognitive development. Scientists have long recognised the nature-v-nurture debate as fallacy. A huge amount of our brain development takes place in the first three years. In those years, the brain grows in relation to the environment, forming itself in interaction with sensory experience. As Hart and Risley showed in their study of the word gap, that experience can have a huge effect on who that person becomes. We have evolved to be a species of teachers and learners. Our ability to understand other people arrives around the ninth month, at a moment in their development at which babies begin to check the attention of others by holding or pointing at objects.

Turning the tables: Is Big Tech under threat from traditional banks?

According to White, the real battleground between Big Tech and banking sits in I2O, which is about how people interact with their money and how these are translated into opportunities.  "Big Tech has, on a minimum, 2000 interactions per customer per year," states White. "Banking, on the other hand, has 200 interactions. That is, Big Tech creates high frequency of interactions, with a high volume of data sets, but with low value; as opposed to banks' model which is low frequency, low volume and high value," he adds. In other words, that is 10:1 on volume of interactions, but does that translate into an equivalent 10:1 of value? White challenges that. "Despite more interactions, customers liking a social media post on Facebook or searching for a product on Google adds relatively low value data since it cannot be monetized much," he argues. "On the other hand, even if banking gets fewer interactions, all these are high value ones from a monetary point of view. According to him, the real questions are not the volume of interactions or its frequency. "The question of the future in this battleground between big tech and banking is how smart these interactions are."

Citizen AI: A business guide to raising artificial intelligence in a digital economy

How do you improve the way people work and live? Accenture's Technology Vision 2018 report tackles this question by highlighting trends and rapid advancements in technologies that are improving the way people work and live. The report highlights a need for a fundamental shift in leadership that is required to cultivate partnerships with customers and business partners, and to further accelerate the adoption of artificial intelligence as the fuel for enterprises to grow and deliver social impact. Accenture's 2018 report, called Intelligent Enterprise Unleashed: Redefine Your Company Based on the Company You Keep, highlights how rapid advancements in technologies -- including artificial intelligence (AI), advanced analytics and the cloud -- are enabling companies to not just create innovative products and services, but change the way people work and live. This, in turn, is changing companies' relationships with their customers and business partners.

Nearly 60 AI and robotics experts from almost 30 countries have signed an open letter calling for a boycott against KAIST, a public university in Daejeon, South Korea, that has been reported to be "develop[ing] artificial intelligence technologies to be applied to military weapons, joining the global competition to develop autonomous arms," the open letter said. In other words, KAIST might be researching how to make military-grade AI weapons. According to the open letter, AI experts the world over became concerned when they learned that KAIST — in collaboration with Hanwha Systems, South Korea's leading arms company — opened a new facility on Feb. 20 called the Research Center for the Convergence of National Defense and Artificial Intelligence. Given that the United Nations (U.N.) is already discussing how to safeguard the international community against killer AI robots, "it is regrettable that a prestigious institution like KAIST looks to accelerate the arms race to develop such weapons," the researchers wrote in the letter.

Why we need to separate blockchain technology from cryptocurrencies

One of the main misconceptions that fuels the misbelief that blockchain is synonymous with cryptocurrencies is that a blockchain is 100 per cent decentralised, autonomous and open to all. In turn, this stokes the belief that it is not possible for a blockchain to be secure, reliable nor responsible – fundamental principles required for using a technology in business. However, the reality is that blockchain is not dictated by the restrictions of the existing and most well-known Bitcoin or Ethereum networks. While these networks are fully pseudonymous, public and decentralised, the blockchain technology can be fully customised to create a blockchain with bespoke features and rules tailored to a variety of services and requirements. The charge that blockchain is not secure is based on historical public breaches of some types of blockchain. In 2016, a ‘recursive call’ bug in a blockchain was exploited, allowing the hacker to drain the Decentralised Autonomous Organisation (DAO) of $3.6 million in Ether, approximately equivalent to $45 million at the time, collected from the sale of its tokens.

SWIFT finally released the results of the PoC this month and have confirmed that there is a lot more work needed within Banks’ back office technology and operational processes for DLT to be relevant. The PoC was aimed at international payments and how intraday/real time liquidity management could be performed using DLT. Correspondent banks provide services on behalf of another overseas financial institution through a correspondent account. However, about 34% of the cost of an international payment is related to Nostro trapped liquidity. This is due to the lack of real-time data to optimize intraday liquidity management. Managing Nostro accounts and ensuring there is no over funding or overusage of credit lines depend on availability of real time data. A real-time feed of transaction data would allow banks to release payments to customers quicker, whilst reducing liquidity risks. With that as the driver behind the initiative, a consortium of 34 banks worked on this use case with SWIFT. In Q1 2017 SWIFT had launched their Global Payments Initiative (GPI) with these banks and it went live without DLT.

A Brain-Boosting Prosthesis Moves From Rats To Humans

The results have impressed other researchers, as well. "The loss of one’s memories and the ability to encode new memories is devastating—we are who we are because of the memories we have formed throughout our lifetimes," Rob Malenka, a psychiatrist and neurologist at Stanford University who was unaffiliated with the study, said via email. In that light, he says, "this very exciting neural prosthetic approach, which borders on science fiction, has great potential value. (Malenka has expressed cautious optimism about neuroprosthetic research in the past, noting as recently as 2015 that the translation of the technology from animal to human subjects would constitute "a huge leap.") However, he says, it's important to be remain clear-headed. "This kind of approach is certainly worth pursuing with vigor but I think it will still be decades before this kind of approach will ever be used routinely in large numbers of patient populations."

"The manager has a short-range view; the leader has a long-range perspective." -- Warren G. Bennis

Posted by Kannan Subbiah at 3:24 PM