An eco-friendly internet of disposable things is coming 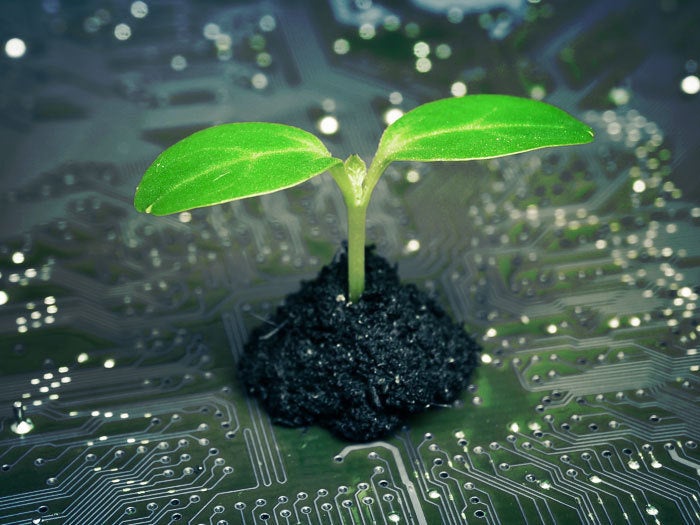 The “internet of disposable things is a new paradigm for the rapid evolution of wireless sensor networks,” says Seokheun Choi, an associate professor at Binghamton University, in an article on the school’s website. “Current IoDTs are mostly powered by expensive and environmentally hazardous batteries,” he says. Those costs can be significant in any kind of large-scale deployment, he says. And furthermore, with exponential growth, the environmental concerns would escalate rapidly. The miniaturized battery that Choi’s team has come up with is uniquely charged through power created by bacteria. It doesn’t have metals and acids in it. And it’s designed specifically to provide energy to sensors and radios in single-use IoT devices. Those could be the kinds of sensors ideal for supply-chain logistics where the container is ultimately going to end up in a landfill, creating a hazard. Another use case is real-time analysis of packaged food, with sensors monitoring temperature and location, preventing spoilage and providing safer food handling.

How to Get Hands-On with Machine Learning

If you really want to understand the capabilities and limitations of machine learning, you have to get hands-on. Here's a short list of options for beginners. Everyone should have a conceptual understanding of machine learning, so they can communicate more effectively with practitioners. To really understand what machine learning can and can't do, you have to get hands-on with it, which is what the curious, the career builders, and the DIY problem-solvers are doing. The starting point differs for individuals based on their education and experience. However, the titles of resources may not necessarily reflect that fact. Following is a short list of resources with a bit of insight into their requirements and value. Deep learning, a subcategory of machine learning, has been omitted intentionally to keep the focus of this article on machine learning in general. Competitions provide an opportunity for anyone to get hands-on with machine learning. Don't let the word "competition" scare you, because you'll find a lot of helpful resources at these sites available free to anyone. Later, if you decide to compete, and if you achieve a prominent position on the leader board, you'll have something more to add to your resume.

What is data science? Transforming data into value

The business value of data science depends on organizational needs. Data science could help an organization build tools to predict hardware failures, allowing the organization to perform maintenance and prevent unplanned downtime. It could help predict what to put on supermarket shelves, or how popular a product will be based on its attributes. "The biggest value a data science team can have is when they are embedded with business teams. Almost by definition, a novelty-seeking person, someone who really innovates, is going to find value or leakage of value that is not what people otherwise expected," says Ted Dunning, chief application architect at MapR Technologies. "Often they'll surprise the people in the business. The value wasn't where people thought it was at first." ... Data science is generally a team discipline. Data scientists are the forward-looking core of most data science teams, but moving from data to analysis, and then transforming that analysis into production value requires a range of skills and roles. For example, data analysts should be on board to investigate the data before presenting it to the team and to maintain data models.

A security attack might be design to either strain or eliminate a network’s resources. Once malware enters the network, it may continuously send requests for data to deliberately use up your available bandwidth. The severity of an attack like this could range from slowing the network down to a full-scale denial-of-service (DoS) attack. Whatever the intent, excessive or harmful data usage will put a huge strain on your network’s performance. Without the right security resources in place, your network will have to work hard to keep up. Another way security threats can overload your network is by installing resource-draining applications and leaving them to use up bandwidth. A network performance monitoring (NPM) solution can sweep for any unwanted software and alert your team to it so you can take steps to remove it from your infrastructure. Security threats can target any hardware on your network’s infrastructure. Malware might try to bring down either devices connected to the network or the network nodes that you have installed.

What is a botnet? When armies of infected IoT devices attack

A botnet is a collection of internet-connected devices that an attacker has compromised. Botnets act as a force multiplier for individual attackers, cyber-criminal groups and nation-states looking to disrupt or break into their targets’ systems. Commonly used in distributed denial of service (DDoS) attacks, botnets can also take advantage of their collective computing power to send large volumes of spam, steal credentials at scale, or spy on people and organizations. Malicious actors build botnets by infecting connected devices with malware and then managing them using a command and control server. Once an attacker has compromised a device on a specific network, all the vulnerable devices on that network are at risk of being infected. A botnet attack can be devastating. In 2016, the Mirai botnet shut down a large portion of the internet, including Twitter, Netflix, CNN and other major sites, as well as major Russian banks and the entire country of Liberia.

Blockchain and the sharing economy

Whether blockchain will ever play a meaningful role in the sharing economy is up for debate. Some skeptics say it's all hype and blockchain's role could be minimal at best. But proponents say there is a natural fit between blockchain and the sharing economy services. The Blockchain Council, a group of blockchain experts and enthusiasts who support research and development of the technology, has noted that businesses such as Uber and Airbnb depend on their users to bring value to their networks. "The problem with this model is that the revenue generated is not fairly shared with all of the members that help generate content," the council said. Blockchains, because of their decentralized nature, allow for smart contracts that can deploy software in a secure and decentralized manner, it said. "Therefore, with Blockchain implemented software, we do not need to rely on massive data centers to run the enormous profit-making platforms," the council said.

Meeting the Challenge of Artificial Intelligence

While AI is still an evolving technology, many applications have recently made impressive leaps. For example, computers can defeat chess champions, help drive cars, instruct drones to return automatically, provide medical diagnoses, perform as virtual assistants, and navigate vacuum cleaners through a furnished house. The AIapplications for business involve training computers to do tasks employees can perform, learning from experiences and adjusting to new data, if needed. Currently, CPA firms can use intelligent robots to count inventories, inspect fixed assets, handle bank audit confirmations, and read contracts or other documents to generate meaningful insights. Some CPAs may assume that, like big data or blockchain, AI is a relatively recent development. To the contrary, AI research started even before the creation of the Accounting Principles Board, FASB’s predecessor, in 1959. Subsequently, several subfields of AI have emerged, including robotics, perception (vision and speech), machine learning (ML), and expert systems (ES).

Wipe Away the Threat of Wiper Attacks

As with ransomware, resisting wiper malware requires putting defenses in place before attackers come calling. "It is time for strong authentication, least privilege access control - or at least 'read-only' or 'execute-only' - and end-to-end application layer encryption," Murray says. But that's just the start. "You can add privileged access management - PAM - and safe backup with fast recovery to those three measures," Murray tells me. Don't stop there. "We need greatly improved proactive threat detection," Murray says. "We need out-of-band confirmations and alerts for all transactions, many data changes, and some users. We need document management systems for intellectual property." "In addition to implementing multi-factor authentication, make sure that legacy protocols that don't support MFA are either disabled or tightly restricted," Lee Neely, a veteran security professional at Lawrence Livermore National Laboratory, says in a recent SANS Newsletter. "Additionally awareness reminders, including spam/phishing reporting processes, would be timely." Unfortunately, many organizations don't have many of these essential defenses in place.

The role of blockchain in information governance

Today, businesses are finding success with a federated content approach using content services. They are building applications that call content services without consumers' knowledge of which underlying system the content resides. Within an organization, it is possible to access the content across different content services platforms (CSPs) using a single set of content services. However, content exists outside the control of a business. For instance, government embassies, immigration agencies and law enforcement organizations act upon visa applications at different stages of a visa process. Each organization has its own system for tracking visa applications, and each needs access to the latest information at all times. Similar multi-organization interactions occur in healthcare as patients move between different providers. Each provider adds content to the patient's record creating a complete medical history. The need for instant access to the latest content can have a life-or-death impact.

Agile Planning: Always Plan for a Product, Not a Project!

Agile estimation is done by evaluating the amount, complexity, risk, duration, and business value. There are many agile estimation techniques that are in practice, which include T-shirt sizing, Planning Poker, The Bucket System, Fist to Five, Dot voting, Affinity mapping, etc. Velocity is the amount of work done by the team in a given time, and in Agile we sum up the story points that were completed in that sprint to determine the velocity. This is a kind of measure of the productivity of the team; it depends on various factors, but it best works with stable and experienced teams. So, while working with new teams, the product owners and scrum masters should be liberal and let the team stabilize. Relative Estimation is a kind of estimation not by units of time but how items are like each other in terms of complexity. Instead of estimating each user story separately, we estimate by comparing or grouping items of similar difficulty. For example, feature B might be "twice as complex" as feature A, which you have already completed. So, if feature A took two weeks, we can guess that feature B would take four weeks to complete.

"A true leader always keeps an element of surprise up his sleeve which others cannot grasp but which keeps his public excited and breathless." -- Charles de Gaulle