The end of the cloud is coming

An internet powered largely by client-server protocols (like HTTP) and security based on trust in a central authority (like TLS), is flawed and causes problems that are fundamentally either really hard or impossible to solve. It’s time to look for something better — a model where nobody else is storing your personal data, large media files are spread across the entire network, and the whole system is entirely peer-to-peer and serverless (and I don’t mean “serverless” in the cloud-hosted sense here, I mean literally no servers). ... Peer-to-peer web technologies are aiming to replace the building blocks of the web we know with protocols and strategies that solve most of the problems I’ve outlined above. Their goal is a completely distributed, permanent, redundant data storage, where each participating client in the network is storing copies of some of the data available in it.

How to monetise AI with a reboot in design

Human-centred interactions between people and machines have profound implications on the design of products and services. No longer do consumers need to command machines using a graphical interface: voice interfaces such as Alexa, Siri and Cortana etc. have changed that. Next, the emphasis will shift from understanding the meaning to interpreting intent. For example, in Toyota’s Concept-i car instead of commanding its virtual AI assistant, Yui, to turn the AC up, Yui will be able to understand intent in statements like “I’m feeling a bit cold.” It isn’t necessary to look into the future to see this trend. Already data-driven products are taking on board the emotional reactions of their users. For that reason, the best data-driven services don’t exhaust the user with endless data-gathering questions: Apple Music asks new users to “Tell us what you’re into” and presents a few bubbles containing genres to select.

Value-based care has accelerated the need for seamless data sharing in an environment that is both transparent and unquestionably trustworthy – one that can bring payers and providers together to improve quality, reduce costs, and enhance the patient experience. While stakeholders have offered up plenty of potential solutions for creating a free-flowing data environment that can support the complex environment of pay-for-performance reimbursements, blockchain may be the methodology that ticks the most boxes with a relatively low amount of effort. At Hashed Health, an industry consortium dedicated to applying blockchain to real-world use cases, CEO John Bass believes that the distributed ledger approach offers a number of promising improvements to the way providers, payers, and patients collaborate in a value-based world.

Future of Digital Currency May Not Involve Blockchains

The problem with cryptocurrencies conceived before Bitcoin was their centralized structure. Without Blockchain technology, there was no “decentralized, immutable, transparent” ledger in which transactions could be recorded, leading to a centralization. Yet it looks like Blockchain may not be the be-all, end-all of digital currency technologies. Recently, a new form of crypto has emerged that leverages the Directed Acyclic Graph (DAG) organizational model for the structure of its decentralized ledger, allowing old problems to be solved and new features to be added. Today, we’re going to take a look at the technology that can potentially replace the Blockchain itself and some of its current implementations. Although the implementations that we are going to discuss today are new, the concept is not.

One problem the industry is seeing, however, is that there’s a severe lack of developers and new talent. It’s a problem for the entire development and programming industry, not just machine learning. Many companies and brands are vying for new employees, leaving the startups and newer names in a bit of hot water. Luckily, this can be offset by adopting open-source development protocols. More importantly, you can open your projects — future and present — to an even broader development community and audience by making it open-source. Open-source tools allow anyone to contribute to a project and work on fixes for bugs, new features and new builds. You can retcon separate versions, selecting the content and elements you want in an official release. This way, even though there’s a development community behind the project, you still have a great deal of control over the central project path.

The road to artificial intelligence in mobility—smart moves required

This overall interest in what AI could enable in automotive and mobility technology leads to a considerable willingness to pay for those features. Of the consumers who indicated high interest in AD features (24 percent of those surveyed), 46 percent are willing to pay more than $4,000 for autonomous-driving features on their next car. And AD features are so important to consumers that 65 percent would switch OEMs for better AD functionality; that figure exceeds 90 percent for young consumers and those living in large cities. Expectations are high, though, and may need to be tempered. On average, consumers expect full autonomy to be widespread in about five years—a tight timeline for any player, and for regulators. Machine learning will have a significant impact on the automotive and mobility industry, since it will unlock entirely new products and value pools and not just lead to productivity improvements.

It's not hard to imagine blockchain as a "disruptive skill" that is both fast-growing and hard to find, according to Burning Glass Technologies. While the technology and hiring patterns are in their early stages, it might be a good idea for employers to start figuring out where they will find blockchain talent, "even as they are still considering how the technology will change their business. "Because of its connection with 'cryptocurrencies,' blockchain is associated with finance, and major banks like Liberty Mutual, Capital One and Bank of America have posted openings," Burning Glass Technologies said in its blog. "There are also companies devoted to building blockchain applications, like Consensys Corporation. But the demand for blockchain is much broader, including major consulting firms like Accenture and Deloitte and technology companies like IBM and SAP. ..."

There's a Lot More to AI Than Just Chatbots

Options, where the AI uses data to create a model, but does not integrate with the DMP, are okay and will deliver enhanced business results. But they will never be as powerful as a truly integrated system. Artificial intelligence perceives its environment and makes decisions which will maximize its chance of success at any given goal. This could range from optimizing profit margin, to maximizing stock efficiencies. For example, a supermarket will want to ensure it always has enough salad in stock to supply its customers, while making sure there is minimal wastage and minimal unsold product. A good AI system can take that supermarket's typical sales into account, but should also be linked to weather information, so if there is a freak heatwave in October, the weather, and not just October's average salad sales, will be considered.

In order to understand the options for managing microservice interaction, we should first study its history. Let’s look back to a time that is almost a decade before microservices really took off. In the early 2000s, the book Enterprise Integration Patterns was published. The corresponding web site for EIP remains an important reference for service interaction even to this day. Workflow engines were a popular option back in the days of Service Oriented Architecture, Business Process Management, and the Enterprise Service Bus. The promise at that time was that you could create orchestration style APIs without needing to employ a fully trained engineer. They are still around but there isn’t much interest in this option for microservice interaction anymore, primarily because they could not deliver on that promise.

The Fear of Disruption Can Be More Damaging than Actual Disruption 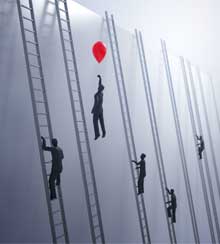 The automotive industry is at the start of just such a period. Massive changes appear to be inevitable: connected cars, autonomous vehicles, battery breakthroughs, and the like. But these changes will probably take decades to be fully adopted. The vehicles themselves have been in development for years now, and their potential impact has been analyzed extensively through computer models. Many critical factors will slow down their adoption. These include technical factors, such as the difficulty of designing vehicles for a wide variety of terrains and climate conditions. Incumbent automakers have built up fundamental advantages in design, manufacturing, distribution, sales, and financing, making it hard for new entrants to compete. All manufacturers, old and new, will need time to ramp up so they can produce the necessary technologies at scale. The transition will also require new types of auto repair shops, new fleet-management companies with new sources of capital for financing them, new forms of auto insurance, and new traffic and safety regulations.

Posted by Kannan Subbiah at 6:36 PM