Why Not All FinTech Providers Are FinTech Firms

“There’s often a disconnect between what a business shows and what’s going on underneath, especially when it comes to technology. It’s almost like an iceberg: The client sees a small, nimble solution, but underneath looms a technology monolith that’s difficult to turn and slow to get around,” Thomas said. He also weighed in on the role financial technology vendors have to play in the future. “As technology companies, we have to acknowledge that we’re playing a leading role in how the industry develops. How can we expect banks to transform if they’re relying on technology dodos instead of agile, forward-thinking FinTechs?” The central tenet here, for all traditional financial services firms, including technology vendors, is recognizing the need not just for change, but a shift to a more agile approach where they can deliver products with the same speed as their FinTech competitors. “It’s no longer good enough to talk the FinTech talk; you have to be able to walk the walk,” said Thomas.

The misconfigured database at UW Medicine was the result of a coding error when data was being moved onto a new server, a UW Medicine spokeswoman tells Information Security Media Group. The organization is not offering free credit or ID monitoring services because the exposed files contained no Social Security numbers, patient financial information or medical records, the spokeswoman says. The files contained protected health information that UW Medicine is legally required to track to, for example, comply with Washington state reporting requirements, the statement says. The exposed information included patients' names, medical record numbers, and a description and purpose of the information shared for regulatory reporting purposes. "The database is used to keep track of the times UW Medicine shares patient health information that meets certain legal criteria," the statement says. The most common reasons involve situations where UW Medicine is required by Washington state law to share patient information with public health authorities, law enforcement and Child Protective Services, the organization notes.

On the future of blockchain and its impact on banking

Quoting his own understanding of blockchain, Balakrishnan says, "Trade finance is the only justified use case which will give a RoI, where people will allow to be impacted, as it being a genuine problem across." ...  As far as payment companies are considered, the barrier to them adopting blockchain would be the legacy systems that have to undergo major change to shift on a newer platform, but a visionary would pave way for it. The lack of standardization across organizations will ensure that the adoption and change will happen in the banks first as an efficiency mechanism and then play it out in other segments. Another avenue would be the consortium lending as Balakrishnan explains,"Multiple banks can come together and look at consortium lending, with assets being clear, reducing frauds, a typical NPA story, a TPA account where money should flow through--can we build a mechanism where all of us could access it and the primary lending institution can play the role of a conveyor and the rest of the stuff is available to us."

Today, BlackBerry took a giant step forward toward our goal of being the world’s largest and most trusted AI [artificial intelligence]-cyber security company,” said John Chen, executive chairman and CEO of BlackBerry. “Securing endpoints and the data that flows between them is absolutely critical in today’s hyper-connected world. By adding Cylance’s technology to our arsenal of cyber security solutions, we will help enterprises intelligently connect, protect and build secure endpoints that users can trust.” Cylance’s machine learning and AI technology is a strategic addition to BlackBerry’s end-to-end secure communications portfolio. In particular, Cylance’s embeddable AI technology is expected to accelerate the development of BlackBerry Spark, the secure communications platform for the internet of things. Designed for ultra security and industry-specific safety certifications, such as ISO 26262 in vehicles, BlackBerry Spark taps into the company’s existing security portfolio of technology that includes FIPS-validated, app-level, AES 256-bit encryption to ensure data is always protected.

Most popular programming language frameworks and tools for machine learning

More than 1,300 people mainly working in the tech, finance and healthcare revealed which machine-learning technologies they use at their firms, in a new O'Reilly survey. The list is a mix of software frameworks and libraries for data science favorite Python, big data platforms, and cloud-based services that handle each stage of the machine-learning pipeline. Most firms are still at the evaluation stage when it comes to using machine learning, or AI as the report refers to it, and the most common tools being implemented were those for 'model visualization' and 'automated model search and hyperparameter tuning'. Unsurprisingly, the most common form of ML being used was supervised learning, where a machine-learning model is trained using large amounts of labelled data. For instance, a computer-vision model tasked with spotting people in video might be trained on images annotated to indicate whether they contain a person.

The most popular approach to quantum computing uses superconducting electronic circuits, piggybacking on the foundations of the semiconductor industry. Whereas ordinary computers encode information as silicon-inscribed bits, either “zeros” or “ones,” quantum computers use quantum bits, or “qubits” (pronounced cue-bits). These particles, weirdly, inhabit multiple states at once. To keep them in flux, they must be kept isolated and cold. Very, very cold. “What you’re looking at is the world’s most expensive refrigerator,” says Bob Sutor, head of quantum strategy at IBM, while gesturing at a 20-qubit quantum computer that company unveiled in January. Despite its small size, Rigetti, founded by a physicist who previously built quantum computers at IBM, believes it can challenge the titans. The company sells a quantum computing cloud service to researchers who are racing to be the first to achieve “quantum advantage,” when a quantum computer outperforms a traditional one. 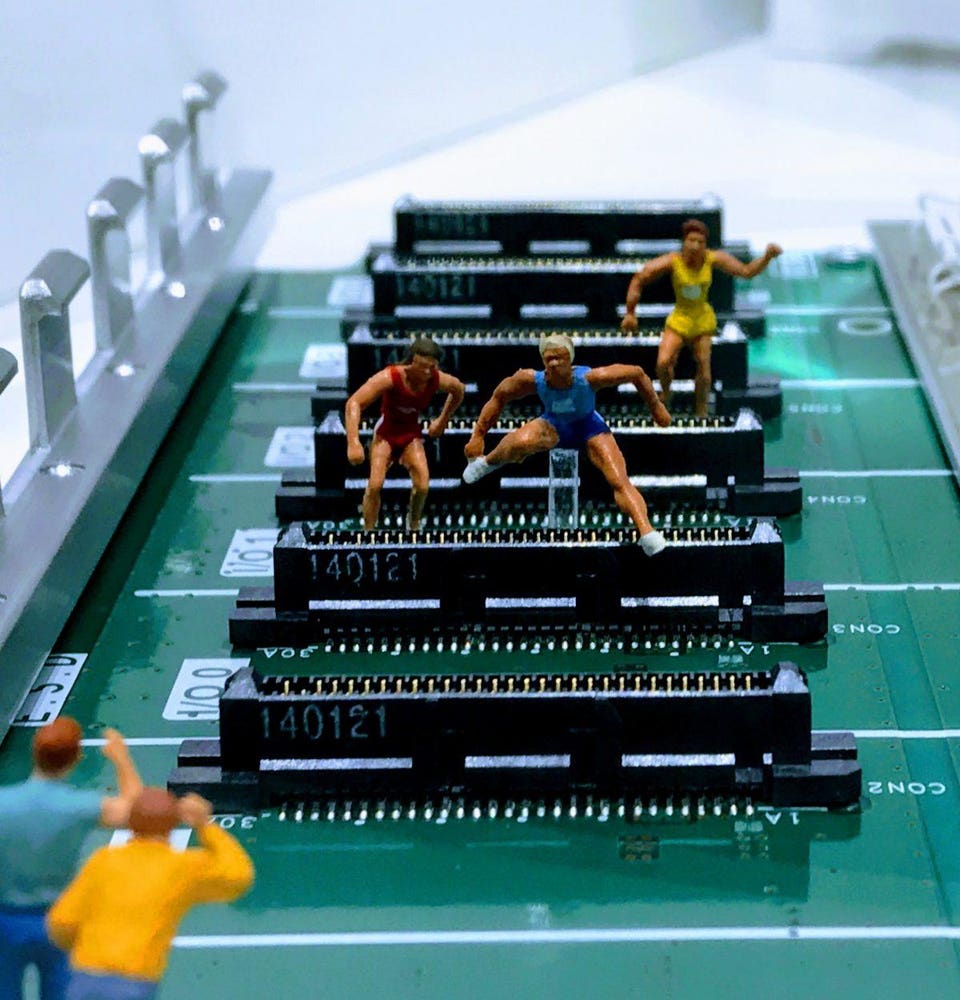 This series of articles has looked at the promise of Big Data, AI, and IoT, and how they all make up one ecosystem. So after looking at the benefits of these technologies in specific environments, it is worth a review of the obstacles faced before they will realize their full potential. Business leaders and media outlets alike have begun to clamor around the promise of AI, Big Data and IoT as if they are a magic bullet that will solve the world’s problems. But no technology exists in a vacuum, and the potential impact of these technologies is currently mitigated by barriers such as standardization, a lack of understanding, and unrealistic expectations at the top of many organizations. Wading through these issues is a challenge, but businesses, enterprises and governments are starting to realize that cooperation and steady progress will bring a quicker win than rushing in head first. Any new technology faces a host of issues in development and rollout, but looking at the current IoT landscape can shed some light on the challenges facing adopters of these particular emerging technologies.

DNS is also being abused for cyber espionage. In November 2018, Crowdstrike said it had spotted such a campaign targeting government domains in Lebanon and the United Arab Emirates. "We are naming it DNSpionage due to the fact that it supports DNS tunneling as a covert channel to communicate with the attackers' infrastructure," Crowdstrike said. In January, FireEye documented a global DNS hijacking campaign "that has affected dozens of domains belonging to government, telecommunications and internet infrastructure entities across the Middle East and North Africa, Europe and North America," possibly sponsored by Iran. As security blogger Brian Krebs has reported, one problem with attacks that utilize DNS is that few companies monitor for malicious DNS changes. Woodward says that's a problem with BGP hijacking as well. While large, well-resourced organizations may quickly spot any such hijacking, service providers in small countries may not.

Among its other breach-related suggestions, CHIME also recommends "amending [HIPAA] language around the responsibilities of business associates by adding that for breaches that start with them they must bear responsibility." That includes notification of media and breach reporting to HHS. Under the current HIPAA rules, covered entities are responsible for notification of breaches by their business associates. The AHA offers similar safe harbor suggestions. "Despite complying with HIPAA rules and implementing best practices, hospitals and healthcare providers will continue to be the targets of sophisticated cyberattacks, and some attacks will inevitably succeed," AHA writes. Whether exploiting previously unknown vulnerabilities or taking advantage of an organization with limited resources, attackers will continue to be successful, AHA notes. "The AHA believes that victims of attacks should be given support and resources, and enforcement efforts should rightly focus on investigating and prosecuting the attackers," AHA writes.

Ludwig is built on top of Google's TensorFlow deep-learning library. There are other "wrappers" of TensorFlow that provide friendly interfaces, such as Keras or Gluon. However, these still require users to define their neural networks by writing code (usually Python). Ludwig pre-packages a large number of popular deep-learning patterns, which can be combined and configured using a YAML file. A large class of deep-learning solutions for vision and speech problems follow an "encoder/decoder" pattern. In this pattern, the input is converted from raw data into a tensor representation, which is then fed into one or more layers of a neural network. The layer types depend on the input data. For example, image data is often fed into a convolution neural network (CNN), while text data is fed into a recurrent neural network (RNN). Likewise, the output if the network is converted from tensors back into output data, often passing through RNN layers (if the output is text) or some other common layer type.

"The test we must set for ourselves is not to march alone but to march in such a way that others will wish to join us." -- Hubert Humphrey